With Christmas soon approaching, it is only appropriate to have a Christmas themed post! We all have our own Christmas traditions on how we spend our time over the festive season, and lots of these traditions are influenced by the culture we grew up in. But how would you be spending this day if you lived in medieval Europe? 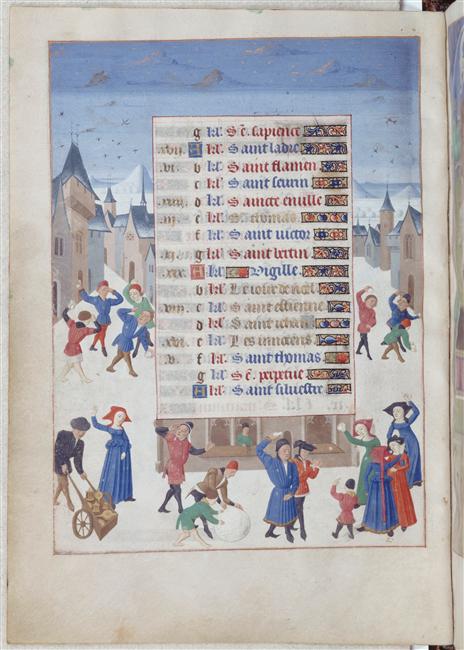 As with many things in the medieval period, this of course could vary greatly depending on how high up the social ladder you were and how much wealth and influence you had. Kings and Queens in courts across Europe were eager to use the festivities to show off their wealth and power, to the benefit of those close to them at court. Christmas celebrations lasted across twelve days, during which royal courts would throw lavish feasts. Music would be played throughout, and the closer you were sat to the royal family showed how important you were. Everything about the feast was intended to show off the wealth of the hosts; the more courses served, the more dishes served in each course, and the amount of roasted meat served all showed how rich the host was. At a royal feast, swan – reserved for members of the royal family – and venison, reserved for members of the nobility, would have been served.

It wasn’t just the main meals that would be luxurious, as members of the medieval court were just as fond of their puddings. Sculptures made of sugar paste and marzipan called ‘subtleties’ would be served, with the sole goal of impressing the dinner guests. Subtleties could range from fairly simple dishes to elaborate concoctions shaped as castles, even complete with wine fountains. As time went on, subtleties could become more and more impressive – the nursery rhyme “sing a song of sixpence” comes from the creation of an Italian cook in the fourteenth century, who put live birds into a baked pie shell. When the guests cut into the crust, the birds flew free. On the continent, these subtleties extended to live performances: in 1378, Charles V of France held a banquet where the subtlety was a huge wooden model of the city of Jerusalem. Actors portraying crusaders then sailed into the hall on a miniature ship and re-enacted the capture of Jerusalem. 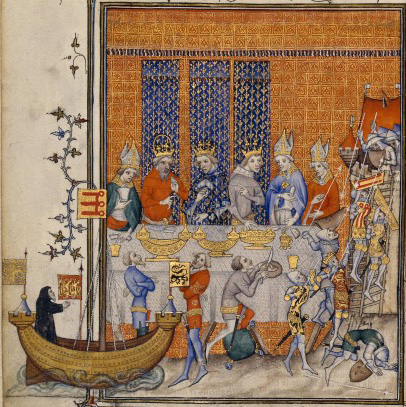 The subtlety at the banquet of Charles V in 1378; illumination from Grandes Chroniques, late 14th century.

Christmas was still foremost a religious celebration, however, and everybody would be expected to go to mass and pray during the Christmas period. Often people fasted for the month of advent, which could explain the lavish food celebrations during the twelve days of Christmas. Although early medieval churchmen often objected to gift-giving, by the mid to late medieval period gift-giving was a Christmas staple, particularly in the royal courts. Giving gifts was an opportunity for the royal family to reward loyal subjects, to show who their favourites and most close advisors were, and again, to show off their wealth. For the Christmas and New Year present of King Henry VI to his uncle, the Duke of Gloucester, and his uncle’s wife, Eleanor Cobham (alleged royal witch, and subject of my first blog post), Henry gave two expensive tablets made of gold, one with an image of the Virgin Mary garnished with diamonds, sapphires, pearls, and other precious objects, the other made in the manner of a man, again garnished with diamonds, rubies and pearls. These expensive gifts confirmed that the Duke of Gloucester was the most powerful man in the country after the King, being, after all, Henry’s current heir, and wielding much political influence.

Christmas was also an opportunity for games to be played. This could include gambling games such as dice-playing, but in medieval France this included an annual game of ‘la soule’ between neighbouring villages. La soule was generally played under the principle that two opposing teams competed for possession of a block of wood or a moss-filled leather ball. The game could be quite violent, as the ball was propelled by being punched, kicked, or struck with sticks. The game usually started at the geographical border between the two parishes, and teams could vary from 20 to 200 players. Usually the aim was to get the ball to the doors of the opposing parish’s church, which could involve traversing forests, streams, and fields. The game could sometimes last days. 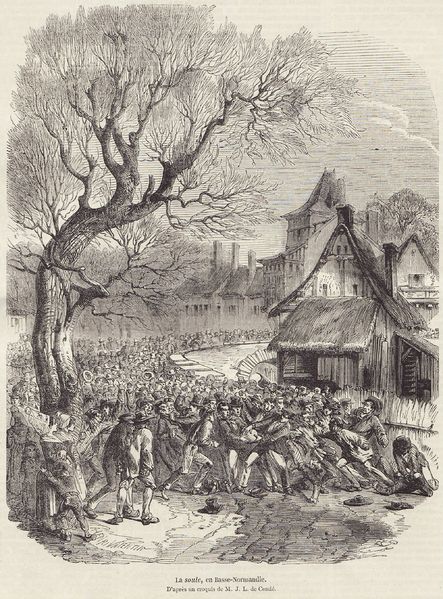 If there was snow at Christmas, then even more familiar games to us may have been played. Snowball fights were clearly enjoyed by all, even members of the nobility, as numerous medieval frescos show. Drawings from the Golf Book, produced in the sixteenth century, depict Tobogganing, and ice skating was also a popular past time. People would use skates made out of bone or wood, and there would even be competitions for the fastest skater to complete a course on the ice. Prizes could include silver spoons, swords, new clothes, and even horses. Ice skating even appears in the life of a Dutch saint, Lidwina of Schiedam, who lived between 1380-1433. Lidwina was one of the first recorded cases of multiple sclerosis, and she had a fall whilst ice skating one day with her friends that some have attributed her disability to. 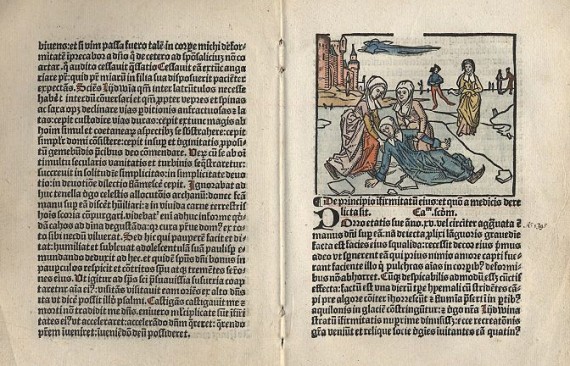 From ‘Vita alme virginis Liidwine’, 1498, by friar Johannes Brugman depicting the fall of Saint Lidwina in an ice skating accident. 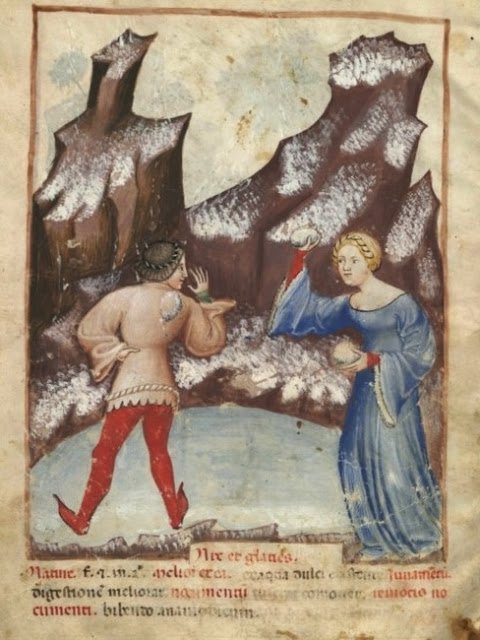 Tobogganing in the margins of ‘The Golf Book’, British Library.

For those near to the King, Christmas day could be lavish, fun, and full of food. In 1482, King Edward IV fed nearly 2,000 people at his Christmas feast. Not to be outdone, his brother and successor, Richard III, spent 1200 pounds on new clothes and gifts as Christmas presents for his court. Games and entertainment abounded, and although church-going was still expected, Christmas was often a time for communities to come together and have fun, forgetting the harshness of winter for a short time, even if this involved a semi-friendly soule match between parishes. At the heart of it, Christmas sentiments were the same as today – whilst the religious aspect was not forgotten, the focus was on fun, food, family and frivolities.

You may like: Fairy Tales or Medieval Reality? Historical origins of fantasy stories

3 thoughts on “Have Yourself a Merry Little (Medieval) Christmas”