I have been meaning to write about Ada Lovelace for a very long time, and as today is Ada Lovelace day I figured what better excuse to start my new series on important historical figures of the past with her. The day falls on the second Tuesday of every October, and was founded in 2009 by technologist Suw Charman-Anderson to celebrate the achievements of women in STEM careers (science, technology, engineering and mathematics). 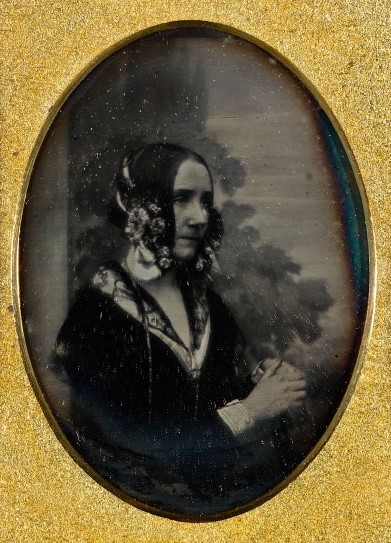 When Ada Lovelace was born, no one could have expected the path her future would take. She was the only child of the poet Lord Byron (leading figure of the Romantic Movement, and notorious for his debts, excesses, and love affairs) and his wife Anne Isabella Noel Byron. She was born on 10th December 1815, almost a year into her parents’ marriage, but the couple were legally separated just a few months later in March 1816. This was not a good start in life for little Ada, as at just a few months old Ada was already famous in Victorian society – for all the wrong reasons.

Although in Victorian England the law gave men full custody of their children if the parents were separated, Ada unusually stayed with her mother, and never saw Byron again. He did request that his sister keep him informed of her welfare, but had no personal relationship with her and died when she was eight years old; Ada was not even shown the family portrait of Byron until her 20th birthday.

Ada’s relationship with her mother through her childhood was a strained one. Lady Byron was terrified that Ada would inherit the worst of her father’s qualities and so she had Ada watched through her teenage years by several of her close friends. Ada dubbed these women the “Furies” and hated their watchful gaze, particularly as she claimed that they exaggerated and made up stories about Ada to her mother. 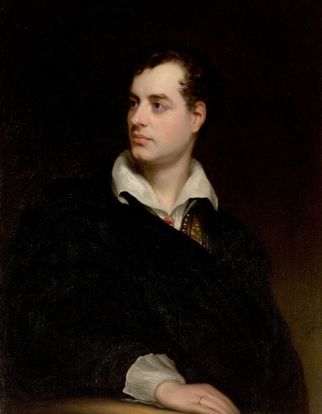 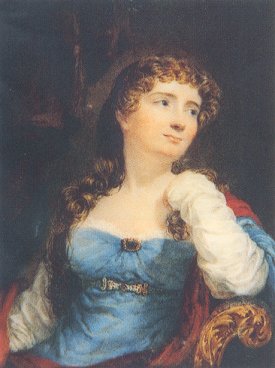 Despite this dark aspect of her childhood, Ada did have her maternal grandmother who often looked after her and heaped love and affection on her. And, despite their difficult relationship, Lady Byron did have Ada schooled in science and mathematics – this was largely to discourage any interest in literary study and, to her mind, distance Ada further from following in her father’s footsteps. Ada took to the sciences like a duck to water, and at age 12 she decided she wanted to fly. She studied the anatomy of birds, considered a variety of materials to create wings, and planned how she may navigate the country. She continued to invent other machines and studied scientific magazines filled with new inventions of the Industrial Revolution. At this time it was extremely unusual for women to be taught science, and so perhaps we owe some thanks to Byron’s extravagant life to enable his daughter to take this different path.

One of Ada’s tutors was Mary Somerville, who was jointly nominated with Caroline Herschel to become the first female member of the Royal Astronomical Society in 1835. Mary introduced Ada to Charles Babbage in 1833 and this meeting would have a significant impact on Ada’s life. Charles was a mathematician, philosopher, inventor, and engineer, who designed the Analytical Engine which is considered the first mechanical computer. 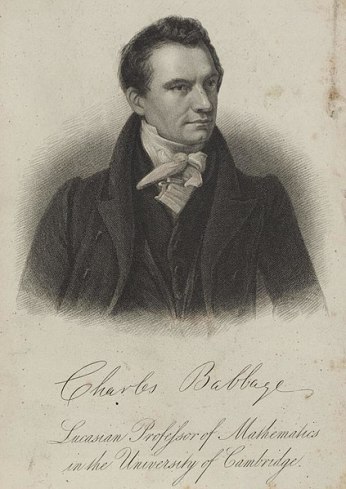 An engraving of Charles Babbage by M. Salmon, 1833.

In the same year, Ada was presented at Court as she was now 17 years old, and she was an instant hit because of her intelligence. She had inherited her father’s charisma, and through the next year she became a regular at Court, partaking in dancing and charming most people she met. In July 1835 she married William, 8th Baron King who was ten years her senior but had an impeccable reputation. Though William and Ada were in love, prior to the marriage Ada’s mother insisted that Ada reveal a dark secret to William that could have stopped the match – that a few years previously, Ada had run away with a tutor of hers whom she had been having an affair with, and the marriage had only been prevented by relatives of the tutor who realised who Ada was. Despite this revelation, William still wanted to marry Ada, and by all accounts the marriage seems to have been a happy one. They had 3 homes – one in Surrey, one in Scotland, and one in London – and 3 children. William supported Ada’s work, and did not expect her to give it up once they had children. In 1838, William was made Earl of Lovelace, meaning Ada became Countess of Lovelace – and thus from the title draws the name that she is known by today.

Charles Babbage’s work on his Analytical Engine started around 1833, the year he met Ada, and it was from this invention that Ada drew her inspiration. Charles’ idea was that the machine would have a ‘store’ which could hold 1,000 numbers of 40 decimal digits, whilst the “mill” would perform all 4 arithmetic operations (addition, subtraction, multiplication and division) as well a square roots. This was revolutionary, as it had all the elements of a modern computer and could do complex computations that would not fall to human error. 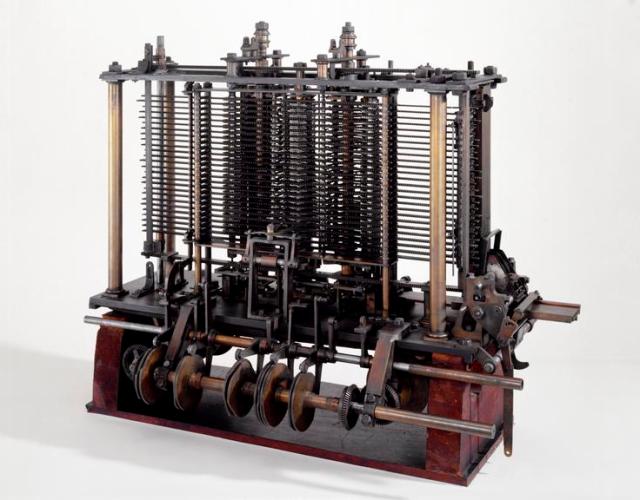 Portion of Charles Babbage’s Analytical Machine as assembled in 1832 by Babbage’s engineer, Joseph Clement. It consists of about 2000 parts and represents one-seventh of the complete engine. The Science Museum.

It was from this machine that Ada is most famously remembered today. In 1842, Italian mathematician Luigi Federico Menabrea published a description of the Analytical Engine based on a lecture by Charles Babbage, but the article was in French and so inaccessible to many in English circles. As a result, Ada was asked to translate the article into English by a friend of Babbage, and Babbage asked her to expand the article because of her intimate knowledge of the machine. The final result was over 3 times the length of the original, and Ada’s notes were ground-breaking.

Not only was her understanding of the machine incredible – with many scientists not grasping the concept – she included theoretical uses for the machine were it built that were far beyond Babbage’s initial scope, such as an algorithm for the machine to compute Bernoulli numbers. This is what gives her the name as the world’s first computer programmer today. Babbage’s idea only included calculating numbers, whereas Ada realised it could be programmed to solve problems of any complexity. She realised that the machine was not limited to simply numbers, and that number could represent other things such as letters or musical notes, leading to her suggestion that “Supposing, for instance, that the fundamental relations of pitched sounds in the science of harmony and of musical composition were susceptible of such expression and adaptations, the engine might compose elaborate and scientific pieces of music of any degree of complexity or extent”. Some have questioned the extent of Ada’s contribution to the machine and the programmes she writes about, but generally her work has been lauded. 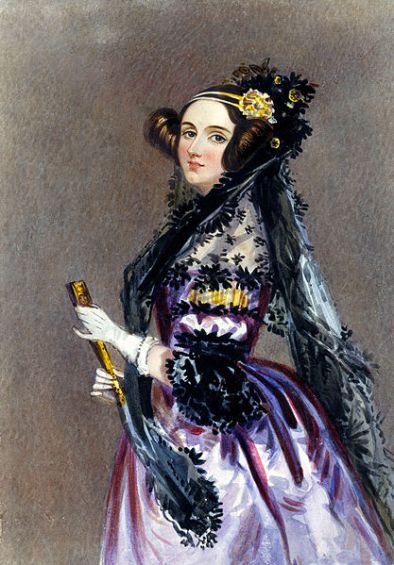 Ada was often ill through life, suffering greatly and dying young. At 8 years old she suffered extreme headaches that obscured her vision, and in 1829 she was paralysed after suffering from measles and was confined to her bed for a year. She did eventually recover, but it took until 1831 for her to be able to walk again and only with the aid of crutches. After the birth of her second child in 1837, Ada was very ill for months with cholera, and doctors prescribed her laudanum and opium which caused mood swings and hallucinations – symptoms that would have worried Ada and her mother who were always looking for signs that Ada had inherited Byron’s ‘madness’.

In 1852, Ada became severely ill with uterine cancer, and the treatment of bloodletting would have weakened her further. Her mother took control of her care, sitting constantly at her bedside as she became worse. Ada was in severe pain, and was prescribed opiates, belladonna, and cannabis was discussed. Although Ada had been somewhat of an atheist in later life, she turned to her mother’s religion as her death became imminent. She died on 27th November 1852 at just 36 years old – the same age as her father upon his death. Despite never knowing her father, in her later years she started to identify with him, seeing the similarities in their personalities, and she ultimately asked to be buried next to him. However, her marriage crumbled right at the end. Just a few months prior, on the 30th August, Ada confessed something – unknown to us today – to William, and this caused him to abandon her bedside. Many suggest that it was a confession to an affair, but the true details can never be known. 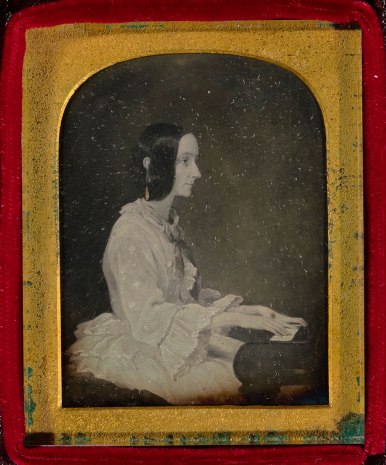 A daguerreotype of an 1852 painting of Ada Lovelace by Henry Phillips, painted in the August of the year that she died when she was extremely ill with cancer. She sat for the painting as Phillips’ father, Thomas Phillips, had painted Ada’s father, Lord Byron.

Ada’s work found real importance during the Second World War, when Alan Turing discovered her translation piece about the Analytical Machine which helped shape his own thinking. Ada had argued against the possibility of Artificial Intelligence, saying that “the Analytical Engine has no pretensions whatever to originate anything. It can do whatever we know how to order it to perform. It can follow analysis; but it has no power of anticipating any analytical relations or truths“. Turing, however, considered the idea saying that machines could at least imitate thinking.

Ada has consistently been used as a figurehead to promote women in the sciences. In 1981, the Association for Women in Computing inaugurated its Ada Lovelace Award, and as mentioned at the start, from 2009 Ada Lovelace Day has been celebrated annually. Events include an annual ‘science cabaret’ including women from STEM, comedy, and music, and in the past have encouraged “Wiki Edit-A-Thons” with the aim of improving the representation of women on Wikipedia.

Whilst some have questioned just how far the ideas Ada published in that translation and accompanying notes were her own, there is no question that Ada was an outstanding woman, particularly for her time. In a period where women were rarely educated, let alone in the sciences, she rose up to be universally admired for her intellect. If she had lived another few decades, who knows what she could have contributed to the field of science. Her success in the face of so much that could go against her shows why she is still remembered so fondly today, and used as a role model for women who wish to enter STEM themselves.

Previous Blog Post: Royal People: The Princes in the Tower 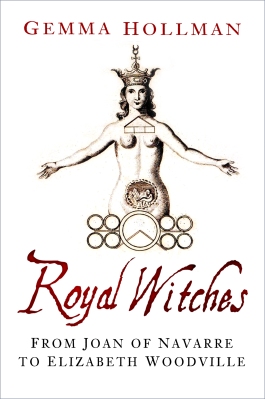 William McKinley: The OTHER President Assassinated in the 20th Century