I recently tweeted the following picture, showing a fashion plate from France, 1778, showing a huge elaborate hairstyle that was often popular with French and English women of this time period. These hairstyles are very evocative of the period, and significantly different from many other time periods, so I thought I would explore what types of hairstyles were popular, and how some of the more extravagant styles were achieved.

The French plate mentioned above.

At the beginning of the Georgian period (early 1700s) the big hair was not yet the vogue, and instead hair looked more “normal”. It was often partially or fully covered with a lace or linen cap, and would be left either to flow long over the shoulders, or be pinned up. Hair was often (but not always) curled.

As the century progressed, slightly more elaborate and fake hair became more popular. Whereas in the earlier parts of the century, where women’s hair was almost always natural, the popularity for men wearing wigs in France began to spread to England and women. Hair began to be puffed out more, and a central parting was popular. Hair would be powdered using flour or starch, and white hair became very popular; this was because white wigs were the most expensive ones, so you would powder your own hair or wigs to make them look as white (and therefore as expensive) as possible. Other colours were popular, however, including more natural browns and greys, or more exciting pinks, violets, and blues. This is, in fact, where the term “powder room” comes from (a modern term for the bathroom) – powdering was a very messy process and often required a separate, special room to do the powdering.

It was in the latter half of the eighteenth century that those huge, elaborate hairstyles gained popularity. Hair had been getting larger and more fluffed up, and the use of wigs encouraged experimentation. Both real and false hair was used, and it was curled and given lots of volume to raise up away from the head. This is where curling tongs were developed to help the process. Metal prongs with wooden handles would be heated over a fire, and then the hair was wrapped around them to curl. The hair was given a helping hand by using rolls of horsehair, wool pads and wire supports to bolster the height and give strength to the creations. Numerous large pins would be used to keep the style in place, and the hair would be decorated with all sorts of things – ribbons, feathers, flowers, wax fruit, etc.

It is difficult to over-emphasise how much work went into these hairstyles. The wealthy would have a team of servants and skilled hairdressers to achieve their perfect looks. Because these styles were so difficult and complicated, and took so long to do, often women would leave their styled hair in for weeks at a time before changing it. This must have made sleeping tricky! The immediate problem, however, was that leaving a hairstyle in for weeks without washing or brushing, in a period of poor hygiene and prevalent lice, was that the hair would start to get extremely smelly. As a result, the hair would have to be regularly perfumed to mask the smell.

A man having his hair powdered by a barber, from a print after Carle Vermat, c1700.

One unimpressed observer wrote the following scathing review of these hairstyles:

“Those piles of decorated, perfumed, reeking mess, by which a lady could show her fancy for the navy by balancing a straw ship on her head; for sport, by showing a coach, for gardening, by a regular garden on flowers. Heads which were only dressed, perhaps, once in three weeks, and were re-scented because it was necessary. Monstrous gatherers of horse-hair, hemp-wool and powder, laid on in a paste, the cleaning of which is too awful to give in detail. Three weeks, says my lady’s hairdresser, is as long as a head can go well in the summer without being opened’.”

Many contemporaries certainly hated this ‘ridiculous’ new fashion, and there are plenty of scathing cartoons from the period ridiculing women and the fashion. I have inserted some below for your viewing pleasure! 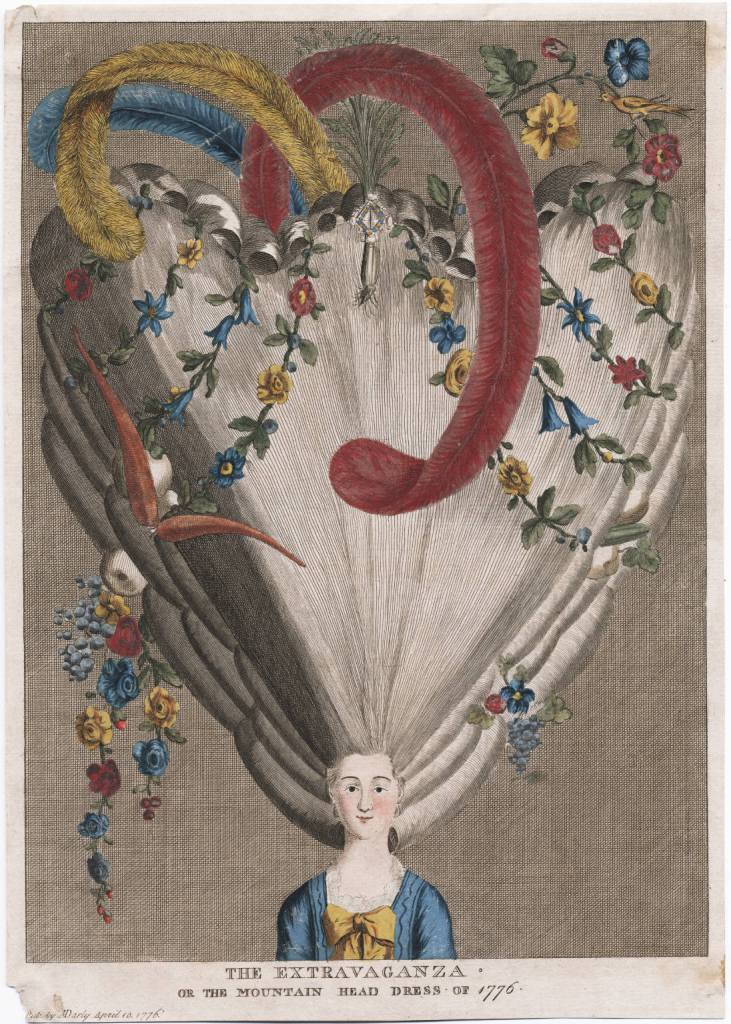 These hairstyles could also be very dangerous, however. The hair was often so huge it was hard to keep track of where it was, and women often had their hair set on fire by accident by candles. Many women were killed or seriously injured as a result of this. There is even an account from London, 1778, of three women taking shelter under a tree during a storm, when the pins in their hair acted as a lightning conductor and one lady was struck, setting her hair on fire. Even from a more practical health point of view, these huge hairstyles that were not touched for weeks on end acted as perfect homes for already-prevalent lice, and it was impossible to treat them when the hair was locked away. Special lice scratching rods were developed which could slide into the hair without disrupting the hairstyle and provide some much-welcomed itching relief.

Hairstyles could be political too. Coëffure à l’Indépendance ou le Triomphe de la liberté, c. 1778. A style supposedly worn by Marie Antoinette (or something similar) to celebrate a French naval victory over the English.

Another style said to be worn by Marie Antoinette.

As the Georgian period entered the nineteenth century, moving into the Regency period, hair began to calm down again. More classical styles were preferred, looking to the Greeks and Romans for inspiration. Hair was still curled, moving towards ringlets, but not in such elaborate, tall styles, but instead kept closer to the face.  A more natural look was once again appreciated. Hair was still coloured, but rather than using powder, more permanent dye was developed using oils, pitch, nuts, saffron, and other natural products. Hair was usually pinned back, but was still sometimes left loose. Instead of elaborate decorations, hair was adorned with more elegant, classical decorations. Ribbons were still used, but pearls, jewels, gold, and silver combs and accessories were gaining in popularity.

Over the 100 or so years of the Georgian period, hair went almost in a complete loop, from natural, to more elaborate, to huge and exotic, back to a simple, classical style. At the peak of extravagance, many women underwent ridicule from men, and many even lost their lives from the danger of the hairstyles. Which type of hairstyle discussed here would you most have preferred to wear?

You may like: Medieval Dating Tips; or, How to bag yourself an eligible Lord or Lady