One of my most popular posts on Just History Posts is my post about Georgian women’s hairstyles. They certainly were most fantastical creations, towering above the wearer and imbued with powder, colour, feathers, ribbons, and more. But many do not realise that the men of the Georgian period also indulged in fancy wigs – if not quite as extreme as the women – and so I thought I would do a post explaining how the men’s hairstyles were executed to perfection.

At the end of the 17th century in England, men were still sporting the ‘cavalier’ type of hairstyle – long, flowing locks reaching the shoulders with lots of volume. This large hairstyle began to shrink as the Georgian period arrived, and wigs became more in-vogue. Tighter, rolled curls and ponytails became the fashion, partly introduced by the French King Louis XV, who liked to wear small white or grayish coloured hair. In England, George II preferred longer locks that reached well below his shoulders, but his white, curly wigs were a firm favourite and helped to cement its popularity in England. Often this long hair was tied back into a long ponytail, tied with a large bow. 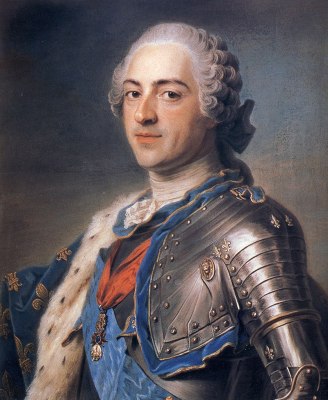 King Charles II (left) sporting a more cavalier-style hairstyle in the 1660s, and King Louis XV (right) with tight, white curls in 1748. Both via WikiCommons.

As with their female counterparts, men were obsessed with powdering their wigs. Not only did this reduce the smell (they were not often washed, and many unsanitary products were put on it which we will come to later) but it could give a nicer, more natural colour to the wig than dyes. In fact, it was this obsession with powdering that gave rise to the term “powder-room” still used today – it was such a messy job to powder one’s hair, the wealthiest of society had a whole room dedicated to it! 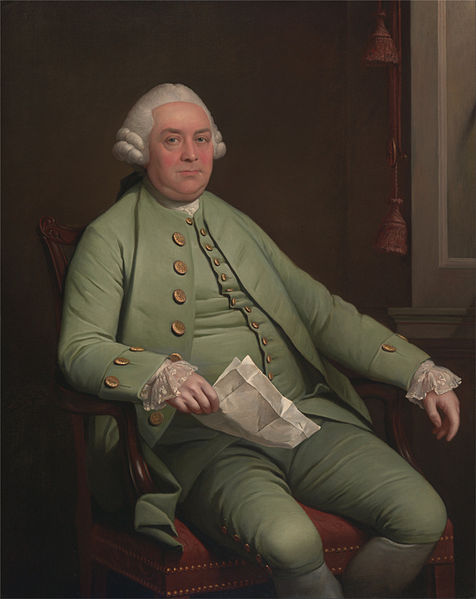 This powder was often made from sifted wheat powder, powdered chalk, or even white clay. The powder was blown onto the hair or wig with bellows, whilst the receiver covered their face. This powder was sometimes accompanied with a pomade (more popular with the elaborate women’s hairstyles, but still used by men) which was essentially a type of grease to slick the hair into place. This was usually made from lard and fat – hence the smelly greasiness that required powdering to hide! It was also, obviously, a lure for flies, fleas, and other creatures. It was not the most pleasant of fashion as may be expected when seen on film or television! 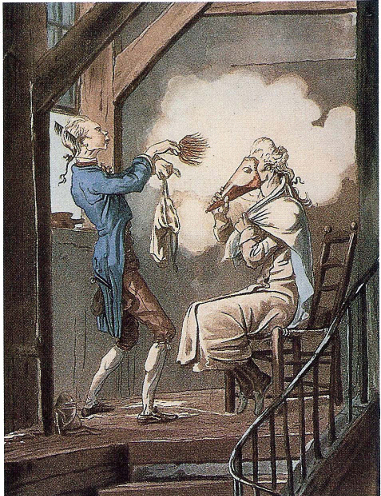 A man having his hair powdered by a barber, from a print after Carle Vermat, c 1768.

As George III took over the throne, the wigs in England began to shorten, as he preferred the shorter style seen in France. This did not mean that less money was spent – at one point, Viscount Fairfax was wearing a newly-dressed wig almost every single day, racking up huge bills from his hairdressers.

By the end of the century, the elaborate white wigs and powder had become more associated with older, less fashionable men. Continuous taxation on hair powder by governments keen to raise funds had also hit the industry hard. William Pitt the Younger placed a sales tax on hair powder in 1786, at a variable rate. However, his next tax in 1795 meant that those who wished to use it had to pay a whole guinea every year to purchase a certificate to show they were allowed to use it. This was an extortionate rate, even for the fashion-forward, and it hastened the end of the pristine white wigs. 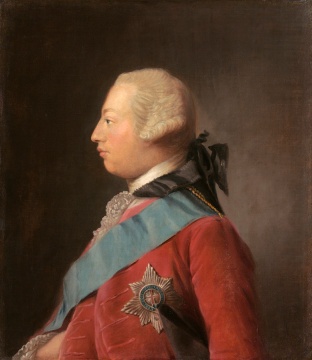 As with women’s wigs, by the end of the 18th century more natural hairstyles were gaining popularity as an interest in classical styles of the ancient Romans and Greeks grew. Hair continued to shorten, and wigs were eschewed for natural hair. Powder continued to be used for a while, and curls were still very much the fashion, although they tended to be looser and more natural, rather than tightly wound.

Men’s hair began to extend down their faces, with sideburns becoming popular as the Georgian period entered the Regency period. One of the leaders of this new, shorter, fashion was the 5th Duke of Bedford, Francis Russell, who sported a cropped, unpowdered, natural hairstyle in protest at Pitt’s second powder tax, and encouraged his friends to join him. King George IV also wore his hair in a short, wavy, ruffled style. Wigs were out, and natural was in. This more natural style began to extend to all aspects of a man’s facial hair, with moustaches and beards becoming popular once more. This eventually led to the generally very-hairy Victorian men’s fashion. Francis Russell, 5th Duke of Bedford, sporting his short haircut in the 1790s. Via WikiCommons.

Although Georgian women’s hairstyles ebbed and flowed, switching between elaborate and natural, Georgian men’s hair had a slow and steady trajectory. From the huge, curly, frizzy messes of the 17th century, to the long, curled white wigs, the styles got shorter and tighter until it was deemed best to go short and natural. Which type of hairstyle do you think looks best?