As the author of Just History Posts, I have very exciting news to share with you all: I have written a book! It will be released on 1st October 2019 by the History Press, but it is available now for pre-order! *update – out now!* The book is called Royal Witches: From Joan of Navarre to Elizabeth Woodville, and this post is to share what it is all about.

The book is a narrative non-fiction work for a popular audience, and it centres on the lives of four women who were part of the English Royal Family in the fifteenth century. Across the space of around 70 years, all four of these women were scandalously accused of using witchcraft in order to influence or even kill the king. These women were: Joan of Navarre, who married Henry IV as his second wife; Eleanor Cobham, who married Prince Humphrey, Duke of Gloucester, who was Henry IV’s son, brother to Henry V, and uncle to the child-king Henry VI; Jacquetta of Luxembourg, who married Prince John, Duke of Bedford, and who later became matriarch of the infamous Woodville family; and Jacquetta’s daughter Elizabeth Woodville, who married Edward IV and was mother to the poor Princes in the Tower.

These women lived during a tumultuous time. The century began with the new reign of Henry IV, a usurper who had claimed the throne from his cousin, Richard II. It then saw a 9 month old boy come to the throne, whose reign would descend later in the century into chaos as warring factions at Court led to a civil war known as the Wars of the Roses. By the 1480s it was every man for himself, and in the two years between 1483 and 1485 four different men were king.

It was inevitable that when so much strife and warfare was going on, the women at Court were going to be caught up in it all. They could be just as ruthless in trying to climb to the top, elevating their family, their husbands, and their children any way they could. Even those who may have wanted a quiet life could get caught up through virtue of their family relations or the wealth they held. Money and power was everything at this time.

I have already written posts about Joan and Eleanor early on in my blogging days, and I got an overwhelmingly positive response from them. People were astonished that women who were in such great positions of power could have been accused of something like witchcraft – especially several centuries before the mass hysteria witchcraft trials that are so much more commonly talked about – and that they were so little-known. 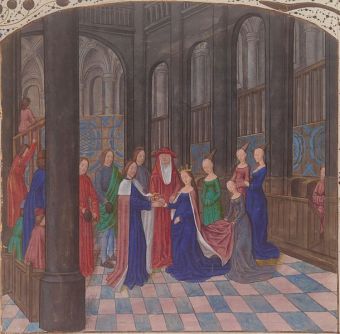 Eleanor Cobham with her husband the Duke of Gloucester (1431), and the wedding of Elizabeth Woodville and Edward IV (15th century). Via WikiCommons.

After several years of research and writing, I can now share these stories with you all. The book explores the unique accusations that each woman faced, what she was supposed to have done, whether she was punished for it, and whether it seems feasible that she actually committed what she was accused of. However, it is also intended to be a biography of each woman. Most of them do not have their own biographies dedicated to them, and the work that has been done on them in the past have often been heavily influenced by attitudes at the time of writing.

The book therefore explores their lives from beginning to end in order to try and rescue them from obscurity and put them in the public sphere, taking the place in history that they deserve to. Learning the context and history of their lives is essential for learning about the accusations, moreover, as each one was entirely political. Whether the women may have dabbled in the craft or not, the accusations were all brought about to reach the aims of men at Court. They were used as pawns to gain money, land, power, and even the throne. It is necessary therefore to understand the dangerous place of Court and the intrigues that were circling to appreciate how these women got caught up in these potentially lethal situations. Even being part of the Royal Family was not enough to save them.

Joan of Navarre was accused of using sorcery to kill her step-son, Henry V. Eleanor Cobham was accused of the same crime against his son Henry VI. Jacquetta of Luxembourg, and later her daughter Elizabeth Woodville, were accused of using love magic to enchant Edward IV to marry Elizabeth. Did they do it? Read about their lives and cases – buy it on Amazon now!

You may like: Royal People: Eleanor Cobham, Royal Witch?
Royal People: Queen Joan of Navarre’s Confinement as a Witch

7 thoughts on “Royal Witches: From Joan of Navarre to Elizabeth Woodville”