Today is the day before Easter and around the world people – Christians and non-believers alike – are preparing to celebrate tomorrow. Whether it’s by eating a pile of chocolate Easter Eggs or having a big meal with family, everyone will have their own traditions. But as Easter has been celebrated for just shy of 2000 years, many of these Easter foods have a long history behind them. So this post explores the origins of a handful of foods found across Europe at this time of year. 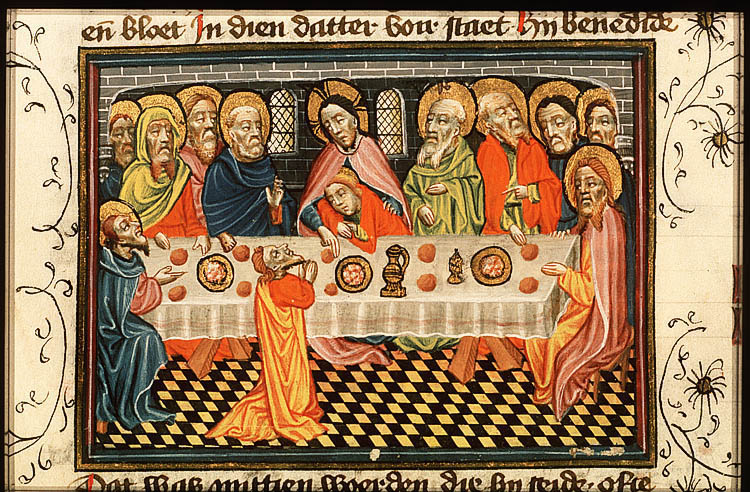 Starting in England with one of the UK’s most popular food at this time of the year is Hot Cross Buns. These sweet spiced buns made with fruit and marked with a cross have a 660 year history originating in St Albans, Hertfordshire. They are believed to have first been created by a monk who lived at St Albans Abbey named Thomas Rodcliffe. He created what was then known as the Alban Bun which he distributed to the poor on Good Friday for the first time in 1361. The cross represented Christ’s crucifixion which is commemorated on Good Friday every year. An article in the Herts Advertiser of 1862 reported on the bun’s history:

“It is said that in a copy of ‘Ye Booke of Saint Albans’ it was reported that; “In the year of Our Lord 1361 Thomas Rocliffe, a monk attached to the refectory at St Albans Monastery, caused a quantity of small sweet spiced cakes, marked with a cross, to be made; then he directed them to be given away to persons who applied at the door of the refectory on Good Friday in addition to the customary basin of sack (wine). These cakes so pleased the palates of the people who were the recipients that they became talked about, and various were the attempts to imitate the cakes of Father Rocliffe all over the country, but the recipe of which was kept within the walls of the Abbey.” The time honoured custom has therefore been observed over the centuries, and will undoubtedly continue into posterity, bearing with it the religious remembrance it is intended to convey.” (https://www.stalbanscathedral.org/the-alban-bun)

Hot Cross Buns had certainly become a delicacy by the Tudor period, for in 1592 the London Clerk of Markets banned the sale of hot cross buns apart from on Good Friday, Christmas, or at burials. Elizabeth I’s successor, James I, also continued to try and suppress their sale. Today, however, they can be found in the UK and beyond in nicely packaged parcels ready for hungry mouths!

In Sweden and Finland a traditional Lenten food is mämmi, a concoction of water, rye flour, malted rye and Seville orange zest. It is eaten cold with milk or cream and sugar. The earliest mention of mämmi is from the 16th century in a dissertation which claimed that it had been eaten in southwestern Finland since the 13th century. Mämmi was made a few days prior to Good Friday and was stored, as cooking was not allowed on this day and meals were supposed to be simple and cold. You might want to be careful about eating too much, however, as it has laxative properties!

Traditional Mämmi served with cream, via the Finnish Embassy.

Over to Italy where Colomba di Pasqua, a sweet bread similar to Panettone, is eaten. Traditionally shaped like a dove to symbolise peace, it contains candied peel and is topped with almonds. There are numerous legends about the origin of the bread. One story says it was first produced after the 1176 battle of Legnano. During this battle the cities of Lombard had managed to defeat the powerful Emperor Frederick Barbarossa who had been attempting to capture Italy for the Pope. Two doves (a symbol for the Holy Spirit) appeared, thus lending their shape to the bread.

Another legend dates the bread much earlier, saying that a dove-shaped cake was made by a girl who had been captured by King Albion of the Lombards in 530 who was subsequently so impressed he set her free. A third story links the bread to St Columban who visited the court of Lombard Queen Theodelinda. When he was offered meat to eat St Columban refused as it was Lent and this was forbidden. To avoid offending the Queen, St Columban blessed the meat, at which point they turned into dove-shaped bread. Whilst its origins are unclear, Colomba di Pasqua are so treasured in Italy that their ingredients and characteristics are regulated under Italian Law.

This Easter cake is a Polish speciality which also has foundations in France. The round cake with a hole in the middle is usually soaked in rum and decorated. The Babka cake was originally associated with the Jewish population, but in the 18th century it was re-imagined by Polish King Stanislaus I. Stanislaus was not very popular with his people and he was exiled for numerous years where he spent a lot of his time at the French court. The story varies slightly in different tellings, but the essence is that Stanislaus was brought a baba cake which he found was too dry. Experimenting, Stanislaus decided to pour some rum on it and he enjoyed it so much it became a new dish. This new cake spread throughout France – according to one story, this was partly due to the influence of Stanislaus’ pastry chef, Nicholas Stohrer, who opened a pâtisserie in Paris where he sold these cakes.

Another type of Easter cake, Osterfladen is a type of milk rice or semolina pudding in a pastry shell, often with an image of a rabbit on top. They are often given as an offering during the Easter mass. It may have existed as early as 962, but one of the earliest references to an Easter cake being blessed by a priest comes from the 14th century in Basel. One of the earliest recipes for Osterfladen to survive comes from a cookbook by a German woman Anna Wecker called “Ein köstlich new Kochbuch” which was published in 1598. The first German cookbook published by a woman, the recipe is similar to today’s Osterfladen, although Wecker didn’t mention any explicit connections to Easter. The Swiss version is particularly associated with Basel where it clearly has a long history, but it is now enjoyed in other countries at all times of year.

Hopefully that has given you a bit of an insight as to how long we have been cooking many of these Easter delights! What will you be making tomorrow?

Previous Blog Post: A Brief Moment of History: When Australia Lost A War Against Emus

Previous in A History of Food: When Pineapples Were The Height of Luxury

4 thoughts on “A History of Food: Easter Cuisines around Europe”